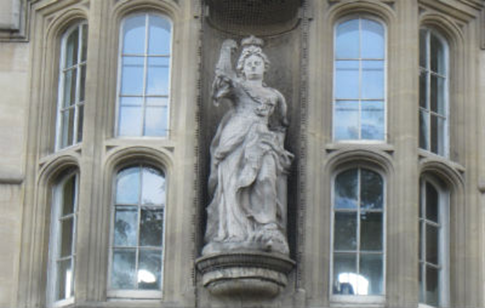 Queen Anne (1665-1714), the last monarch of the House of Stuart, ruled England, Scotland, and Ireland between March 1702 and May 1707, and, following the Acts of Union, Great Britain and Ireland between 1707 until her death in August 1714. Anne is immortalised at Oxford in two locations. A bronze statue, by an unknown sculptor, is situated in a niche on the quad side of Christ Church’s Tom Tower on St Aldate’s, while another stone statue, also by an unknown sculptor can be seen in the facade of Univ on the High Street above the entrance to the Main Quad. This statue was a gift to the college by George Ward, brother of one of Univ’s fellows.

As a young princess, Anne visited both Christ Church and Univ, as well as other colleges and locations in the city, during a five-day visit to Oxford with her father the Duke of York (later James II) and her mother-in-law, the Duchess of York, in May 1683. During the visit, the royal party attended the official opening of the Ashmolean. Today, the museum houses gloves said to have belonged to her and a commemorative plate depicting a topless Queen Anne, venerating her feminine virtues and perceived role as ‘nursing mother’ of her subjects.

Anne married Prince George of Denmark (1653-1708) in July 1683. This successful marriage did not preclude Anne from intimate romantic friendship with female favourites, most notably Sarah Churchill, Duchess of Marlborough (1660-1744). Surviving letters from Anne to Sarah are profoundly passionate. In one Anne wrote: ‘I hope I shall get a moment or two to be with my dear . . . that I may have one dear embrace, which I long for more than I can express.’ In another she yearned: ‘Oh come to me tomorrow as soon as you can that I may cleave myself to you.’ Eventually, however, the two women became estranged and Abigail Masham (1670-1734) became the Queen’s new favourite. Churchill backed the publication of some vindictive poetry which explicitly accused the Queen of having sexual relations with Masham. Churchill’s besmirching of Anne prejudiced perceptions of the Queen for generations.

NEXT CLUE
One poet & playwright certainly knew The Importance of Being Earnest while meandering through this college’s Deer Park. Take a left before you reach the college and follow the Longwall - you may discover something *shocking*.

Hint 1: street mentioned in clue
(Scroll even further if you need another hint)