​scroll to the bottom of the page for the next clue - and remember to take a picture of the location to send to us once you have completed the hunt! 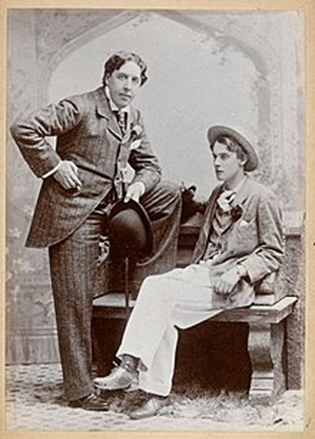 Wilde began his studies in October 1874, and occupied three different rooms during his time there: In his first year he occupied number 1, 2 Pair Right in Chaplains. Number 8, Ground Floor Right in Cloisters in his second and third years, and in his final year occupied Kitchen Stairs, 1 Pair Left with an impressive view of the Cherwell. It was during his undergraduate studies that Wilde’s feelings for other men came to fruition. At the time there was no concept of ‘gay’ or ‘queer’, with the term ‘homosexual’ also not yet in English usage. Wilde’s generation were, however, familiar with the homoerotic traditions of the ancient Greeks and it was this ‘Greek Love’ that resonated with Wilde’s own developing eroticism. Whilst at Magdalen, Wilde began writing poetry, much of it celebrating great male lovers of men from Greek history and mythology.

Wilde courted several women during his time at Oxford, and also engaged in several passionate dalliances with other men. These affairs were interrupted by periods of self-doubt, guilt and remorse. With his desire for social acceptance in a time where homoerotic relationships were dangerous, and torn about his sexuality, Wilde eventually married and fathered two children while continuing to pursue affairs with men. He visited Oxford frequently after his graduation and referred to it as the ‘capital of romance’.

Lord Alfred Douglas attended Magdalen between 1889 and 1893, but left without a degree. Despite being best known for his romance with Wilde, he was a poet in his own right and between 1892 and 1893 he edited ‘The Spirit Lamp’, an undergraduate journal that included poems, stories and essays with homoerotic themes. In one of his poems Douglas famously referred to homoeroticism as ‘the love that dare not speak its name’.

In 1895, Douglas’ father, the ninth Marquess of Queensberry,  left a card at Wilde’s club in London reading ‘To Oscar Wilde, posing as a sodomite’. Encouraged by Douglas who hated his father, Wilde sued the Marquess, igniting the most notorious scandal of the Victorian Era. There were three trials in total that culminated in Wilde being convicted for ‘gross indecency between males’ leading to two years imprisonment, public humiliation and exile. After Wilde was released he and Douglas resumed their relationship in France, where Douglas had fled during the trial to avoid being called upon as witness.

NEXT CLUE
Oscar’s college also has a bridge named after it. If you cross over to the other side you can see the oldest Botanical Garden in the UK - and might discover your final clue!


Hint 1: Magdalen Bridge - South/West side
(Scroll even further if you need another hint)