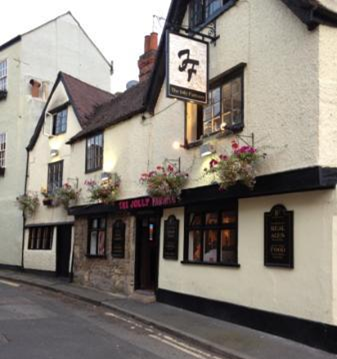 ​The exterior of the Jolly Farmer

The Jolly Farmers, located on Paradise Street, is Oxford’s longest-established gay-identified pub. The Farmers can trace its history back to the 1600s, although a brewing licence on the site dates back five hundred years earlier. The venue opened its doors as a gay pub in 1983 after which it was the only gay bar in Oxford for much of the rest of the decade and into the 1990s. The pub has recently been renovated and is full of character, with a lovely beer garden and most notably its resident pub dog, Sherlock, who can be found roaming the venue and greeting guests!

For more information about the Jolly Farmers go to: facebook.com/JollyFarmersOxford

NEXT CLUE
Towering High overhead are two Queens, one of which certainly had her ‘favourites’, perhaps if you give her a call she’ll reveal the next clue.

Hint 1: Street name within the clue
(Scroll even further if you need another hint)