link to book (free) tickets  if you’d like to go another time:  https://tickets.ox.ac.uk/webstore/shop/viewItems.aspx?cg=ASHRO&c=ROGA
​ 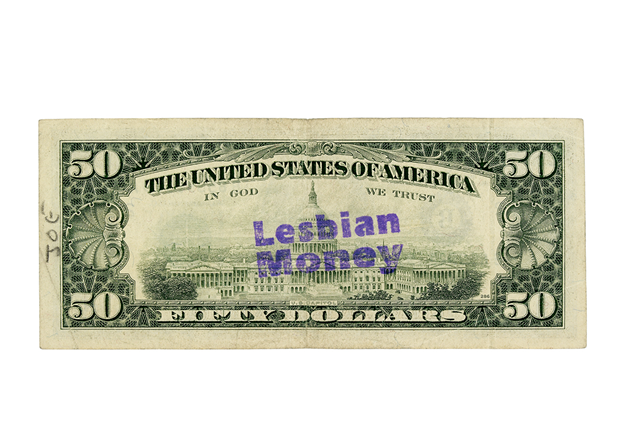 ​The US gay and lesbian rights movements – which evolved throughout the 1970s towards the end of the 20th century – adopted many surprising and covert strategies of political protest and civil disobedience. One particular method of activism was to (illegally) stamp dollar bills with the slogans: ‘gay money’, ‘lesbian money’ and ‘queer $$$’. The circulation of the notes across the States draws on a long tradition of currency being defaced with political messages. As the notes are exchanged from hand to hand, they foster unexpected and intriguing encounters with the dissenting individual, who, in this case, stamped her money in purple – a colour broadly associated with 20th century women’s liberation movements – and the marginalised community of which she was a part. It is an understated, yet powerful, act of resistance, which makes it possible for lesbian voices, in particular, to be seen and heard.

NEXT CLUE
As you stroll down the street on a  pleasant Tuesday evening, you feel yourself being whisked away down the hidden stairs to an underground oasis.

Hint 1: Location for Tuesday Dins / Drinks
(Scroll even further if you need another hint)