scroll to the bottom of the page for instructions on the reward process! 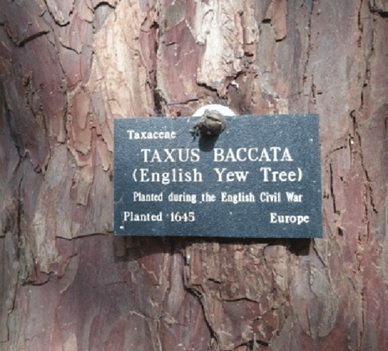 ​The description of the Yew Tree in Oxford Botanic Gardens

Many trees are self-pollinating, with others unable to self-pollinate but still containing both male and female parts. Other species, including yew trees have distinct sexes, and are either male or female. However, it has been observed that these trees are able to switch sex.

One of the older trees in the Oxford Botanic Garden is a male yew tree that was planted in 1645. As such it produces pollen rather than berries. However in the 1980s and in 2012 it has been observed to produce berries and female cones on some of its branches. This intersex behaviour is thought to occur due to a change in the tree’s hormones and demonstrates that in nature sex often isn’t binary.

If you’d like to visit the Botanic Gardens all you need is your Bod card - show it to reception and you should be allowed in (though they currently have limited availability). This tree can be found if you walk towards the fountain from the entrance and carry on straight. Just before you reach the walled garden it is situated on the right hand side. It is currently extremely distinctive as a recent storm blew the top of the tree off.
Congratulations! You have reached the end of our scavenger hunt through the Queer History of Oxford. We hope that you have learnt something on this journey and more importantly have had fun!


Further Information on Queer Oxford:
Our main source for these snippets of Oxford’s LGBTQ+ history was Queer Oxford, a blog curated by Ross Brooks. Queer Oxford encapsules a plethora of facts about Oxford’s gay past and has trails of its own. We’ve also taken information from Out in Oxford - which is “an lgbtq+ trail of the University of Oxford’s collections”, made up of contributions from various members* of the University. While creating this scavenger hunt it was heartwarming to discover just how far our Community reaches across the Uni and Town itself and how many interesting things have come from it.

*Including Clara Barker, who kindly did a very personal online talk with us last term that can still be watched on our Society Facebook page.

REWARDS:
To reap the rewards of this scavenger hunt be sure to send me (ousocialsec@gmail.com) an email with