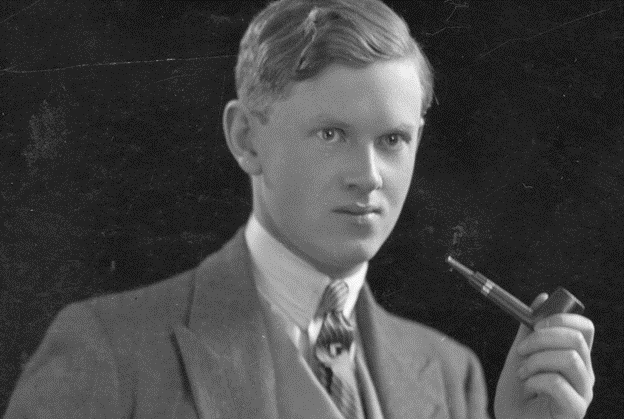 Evelyn Waugh studied History at Hertford College, matriculating in January 1922 where he began gathering new experiences including getting drunk for the first time. By Waugh’s own account, most of his Oxford friendships were forged while drunk and many of these friendships had a homosexual flavour, with his friend  Tom Driberg, later an MP for Labour, recalling that he and Evelyn enjoyed “lively and drunken revels mainly homosexual in character”. Waugh’s classic 1945 novel ‘Brideshead Revisited’ was largely based on his experiences at Hertford College between 1922 and 1924.

In the spring of 1923 he entered an intense relationship with the so-called “friend of [his] heart”, Alastair Graham. Alastair became one of the great loves of his early life and as his muse made the most obvious contribution to the charismatic and unmistakably homosexual character of Lord Sebastain Flyte in Brideshead Revisited, which in manuscript has ‘Alastair’ in place of ‘Sebastian’ twice. When at the end of the summer term in 1923, Alistair failed his history exams and was removed from the university by his family, Evelyn asked his father if he too might leave Oxford and move to Paris to become a bohemian artist. His father, unsurprisingly, denied his son’s request.

Despite Alistair leaving Oxford, the pair remained inseparable with Alistair driving down regularly from his home in Warwickshire in his two-seater car, whereupon he and Waugh would zoom off into the Oxfordshire countryside. In advance of one such visit, Alastair wrote a letter to Evelyn enclosing a photograph of him naked, posing beneath an overhanging rock face with his backside pointing seductively towards the camera.

In later years, Evelyn and Alistair grew apart, with Evelyn expressing to his close friends the desire to find a wife.

NEXT CLUE
This neoclassical museum stands out amongst the more traditional Oxford streets while our next clue sits hidden by the much more modest side entrance.
(Scroll down if you need more help).

Hint 1: Ashmolean museum
(Scroll even further if you need another hint)


Hint 2: Sign-posts can be pretty high…